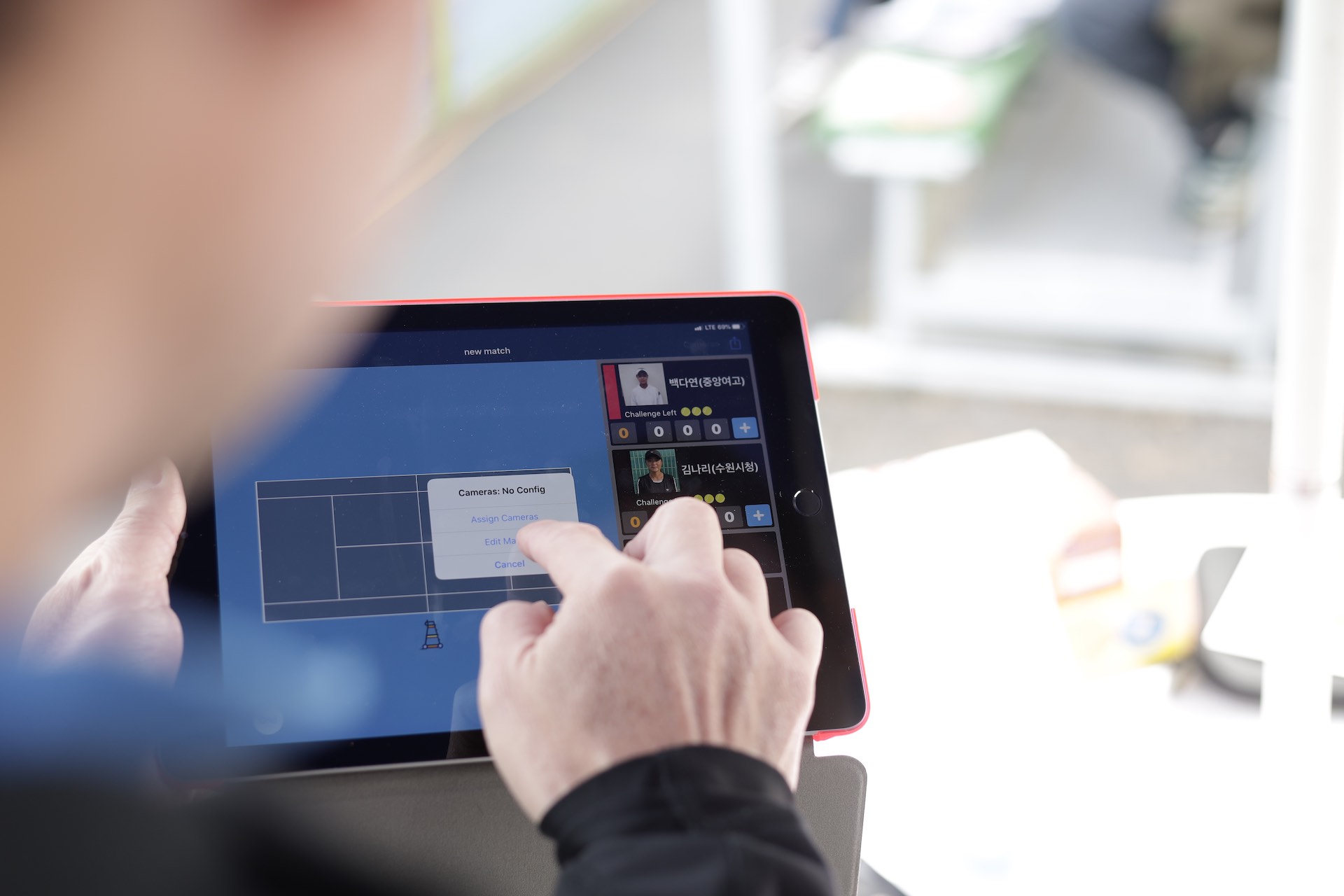 One question people always ask us is where the eyes3 cameras be placed on court.  I will answer that by going through what we did at a recent high level tournament in Korea, the 74th Korea Open Tennis Championship 2019.

Here's one of the challenge in the competition:

The key strength of eyes3 is portability and ease of use.  There are no messy cabling to run, no complex hardware to install.  The system is intended to be operated by the match officials themselves after a quick briefing session on the day of the event.

The complete system can be set up in a matter of minutes, yet still able to deliver high quality and accurate results.  We have also developed a flexible mounting solution (the eyes3 Mounting Kit) that can be used in any court environment.  I highly recommend using teh eyes3 Mounting Kit rather than inventing your own, as it has been battle tested to perform under various conditions.  Visit our online store for more information.

Let's see how we set up eyes3 in the Seoul Olympic Park Tennis Centre in Korea.

We used a total of eight iPhones as the eyes3 CAMERAs on the court.  This is the optimal configuration in the eyes3 Tournament Edition.  Each iPhone was secured by a metallic mount with a 360 rotating ball head.  A 8000 mAh battery was attached to each iPhone for extended operation.  The battery extended the operating time to a total of 8 hours; the operating time can be further extended by swapping the exhausted battery with a fresh one.

We also placed an iPhone on the umpire chair as the umpire control device (in eyes3 CONTROL mode).  The chair umpire used this iPhone to update Match Score and request Challenges.   We used an industrial strength magnet to attach the iPhone and the Mount to the umpire chair.  The battery is also clearly visible in this picture.

Two more iPhones on the opposite side of the court.  Here we put two iPhones on a metal bar on one tripod as there were no obstruction.

After the iPhones have been securely positioned,  we used an iPad (in eyes3 CONTROL mode) to remotely group the cameras together (in a Camera Group) and perform Court Calibration.

Here's a view of one of the camera at the net (eyes3 CAMERA at position 3).  We want to adjust the camera view to include the 2 sidelines, the service line as well as the baseline (sometimes known as the "no-man's land").  You can clearly see eight cameras are connected and happily recording from the green icons at the bottom.

We then perform Calibration on all eyes3 CAMERAs simultaneously.  A computer generated overlay picture appeared, confirming that the Calibration was successful.

Finally, we connected the eyes3 LIVE Scoreboard to a huge LED panel.  The LED panel was assembled onsite by a 3rd party with an HDMI input.  Here's the back of the panel.   Smaller panel or TV can be used as well, as long as there is a HDMI input.

We connected an iPhone (in eyes3 LIVE mode) via the Apple Lightning-to-HDMI adapter.

There you have it.  In a matter of minutes, officials and players at the 74th Korea Open Tennis Championship 2019 were able to enjoy fair and objective electronic line-call system.

I hope this post gives you an idea of how eyes3 is set up in a real-world environment in a high level competition setting.